Experience the Life and Work of Blacksmiths from Kropa

The Iron Forging Museum exhibits the remarkable heritage of Slovenian iron working and develops and preserves an awareness about the importance of ironworking history, which left a significant mark on Kropa, its surroundings and the life of its residents.

The museum chronicles the foundations of ironmaking, the technical and historical development of iron ore processing, the economic, social and cultural conditions in iron settlements from the 15th century until the collapse of the ironworks in the 19th century, and manual nail making in the 20th century. The museum has a unique collection of hand forged nails from the 19th century and the first half of the 20th century. Objects of everyday use that depict the life and work of blacksmith families are preserved and exhibited.

A special museum collection is dedicated to the work of one of the most important Slovenian masters of decorative ironwork, Joža Bertoncelj (1901-1976) from Kropa.

The vigenjc Vice forge is part of the special museum presentation of Kropa’s nailmaking history and is one of the few still active forges of its kind in Europe. A visit to the forge, including a hands-on demonstration of hand forging of nails, is an unforgettable experience that leads visitors into the world of blacksmiths of that time.

Both Kropa and the neighbouring village of Kamna Gorica, with their preserved ironworks houses and technical monuments, are among the important Slovenian historical sites, and are considered the cradle of Slovenian iron forging. In 1953 Kropa became the first place in Slovenia to be proclaimed a cultural monument.

Read about the history of the museum 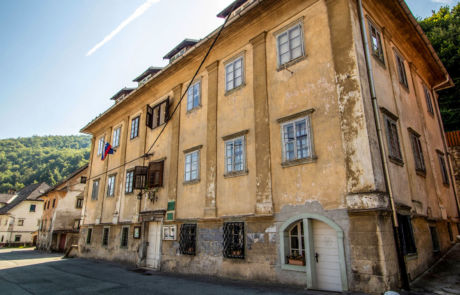 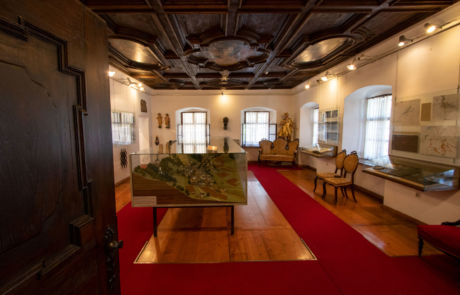 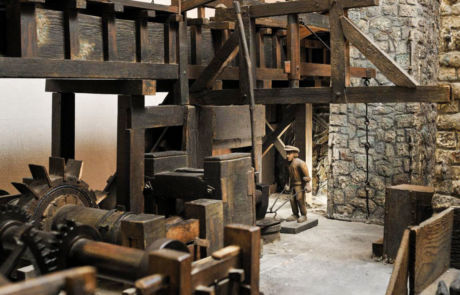 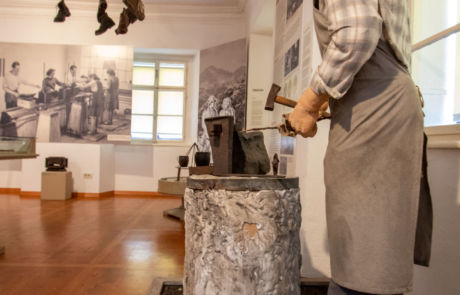 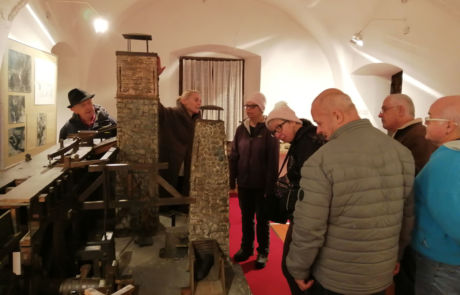 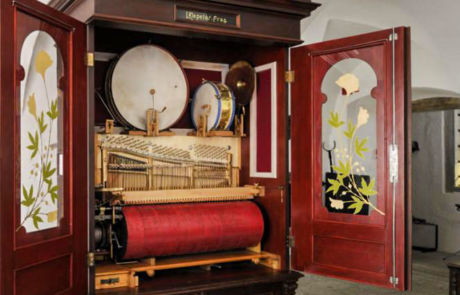 The former structure of the iron working settlement is represented by a large model of Kropa from the second half of the 19th century. Documents outline the historical foundations of ironworking in Kropa and Kamna Gorica and the development and importance of the industrial cooperative established in 1894. There are exhibits dedicated to the importance of the mining laws governing the operation of the foundations up to the end of the 18th century, especially that of Ferdinand’s mining order for Kropa and Kamna Gorica, dating from 1550.

The ethnological collection exhibits preserved items that were used daily and were part of the lives and work of blacksmiths and their families.

Kropa and Kamna Gorica customs, such as floating small handmade boats to welcome spring and the tradition of folk carol singing, are depicted on the vignette by the Kropa painter Peter Žmitko.

The technical collection features objects and models connected with the technical history of mining and ironworking. The exhibits include work equipment and products related to the manual and machine production of nails and screws in Kropa and Kamna Gorica. The museum holds a rich collection of hand forged nails from the 19th and first half of the 20th centuries. One hundred and twenty-seven types of hand forged nails of various sizes and shapes have been documented, which were mainly used in construction and shipbuilding. Special hand-forged shoe nails for mountain footwear and nails for the needs of railways and mines, dating from the first half of the 20th century, are also on display.

Collection of Decorative Ironwork by the Master Blacksmith Joža Bertoncelj

The Iron Forging Museum holds 42 works of decorative ironwork created by the master blacksmith Joža Bertoncelj from Kropa. His ironworking opus originates from Kropa’s tradition of ironworking; the most well-known works were created in the years from 1950 to 1956 in collaboration with the architect Boris Kobe and the Metallurgy Institute in Ljubljana.

The works preserved in the museum were donated by Bertoncelj in 1975: wrought iron shutters with intricate detail, rams’ heads, masks and dragons. 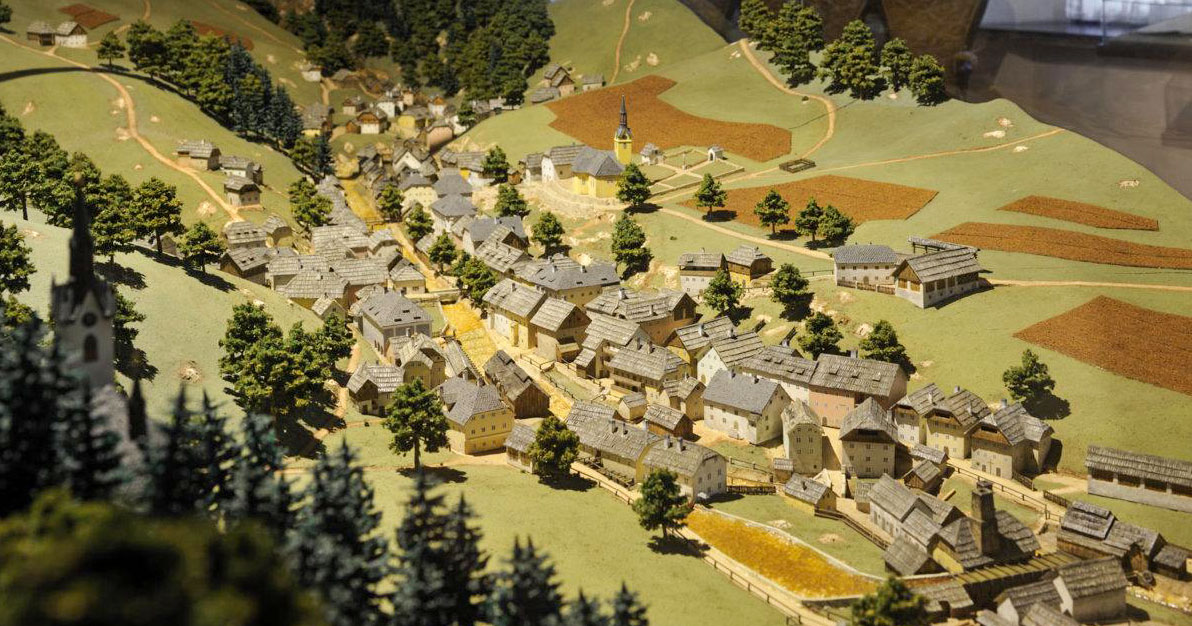 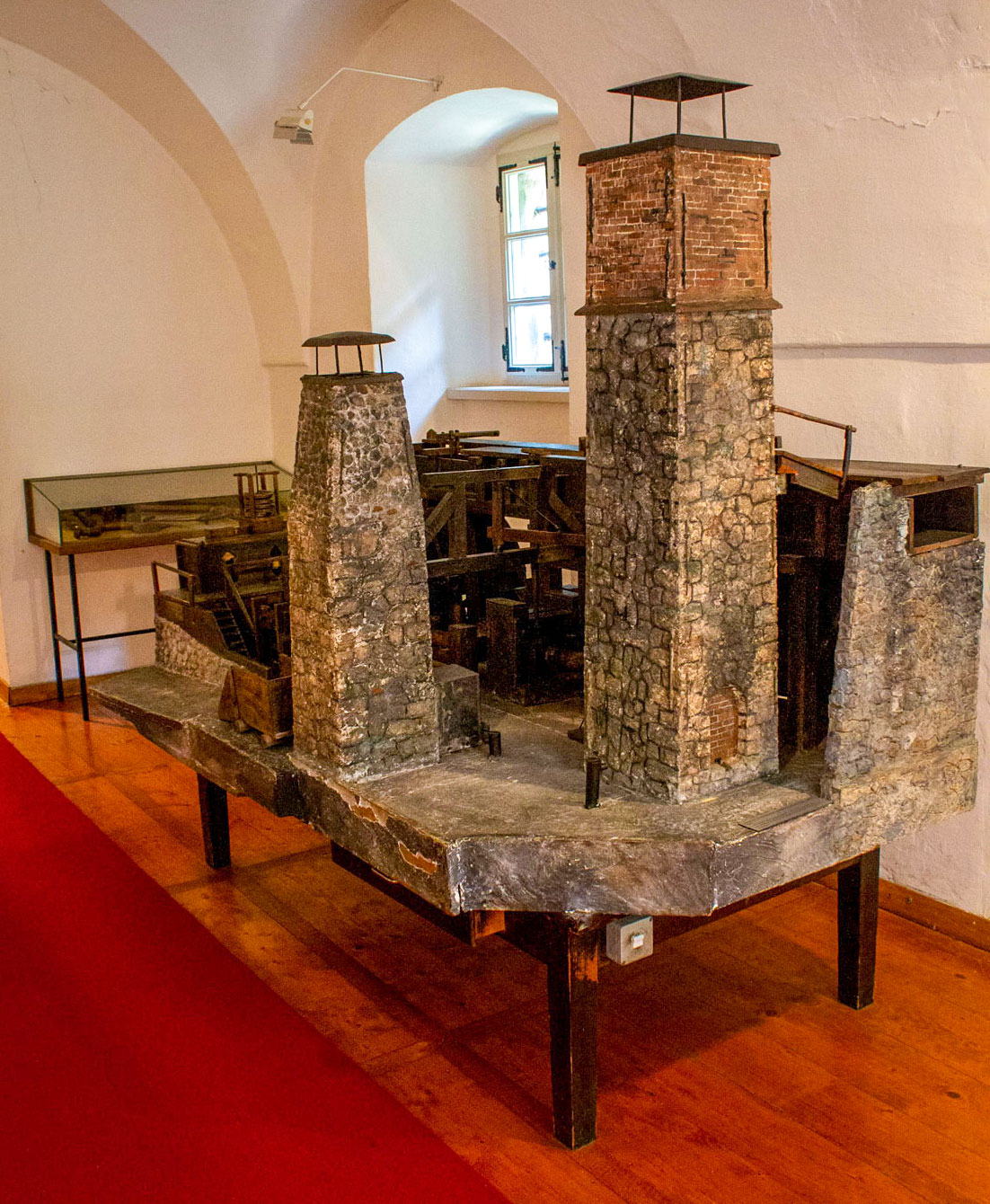 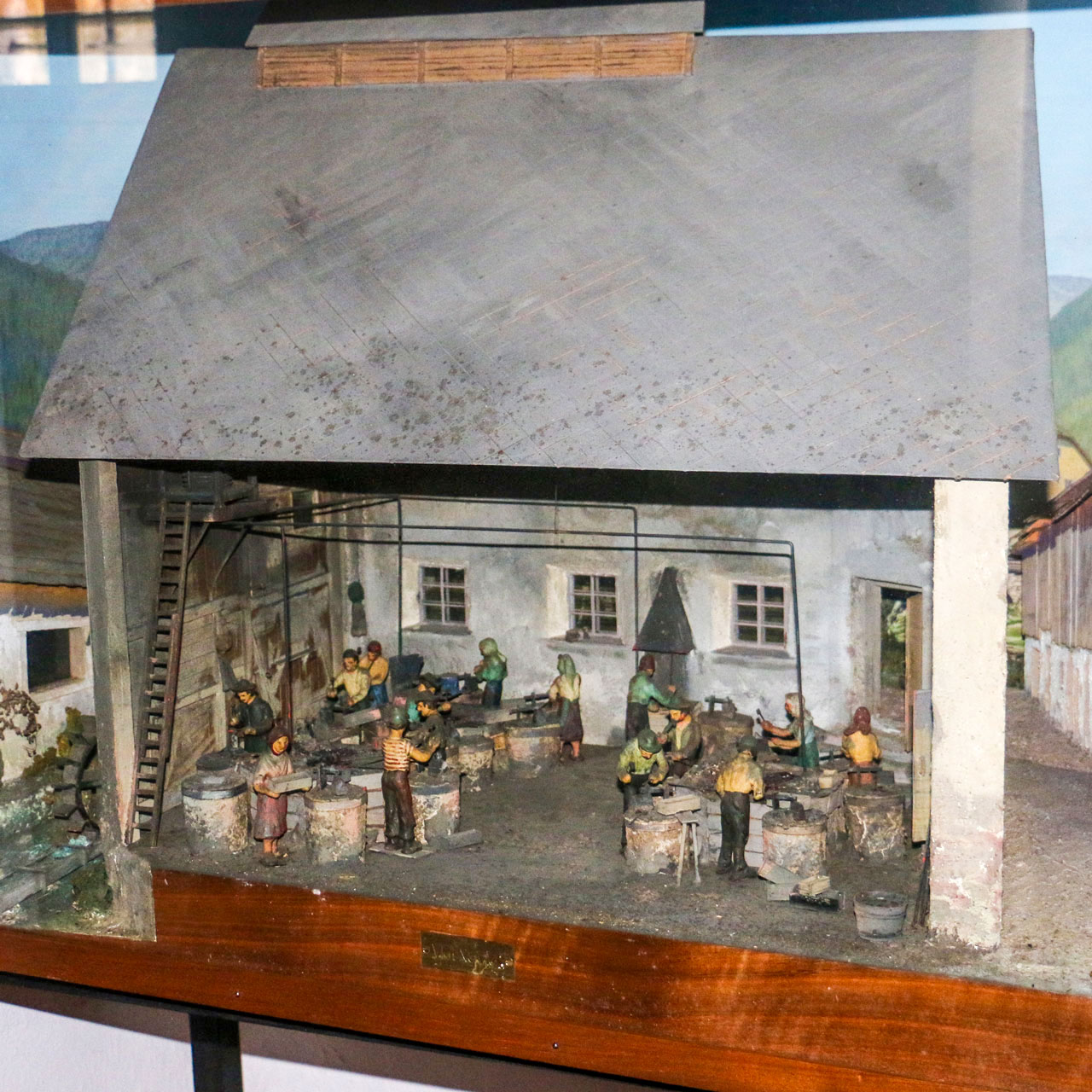 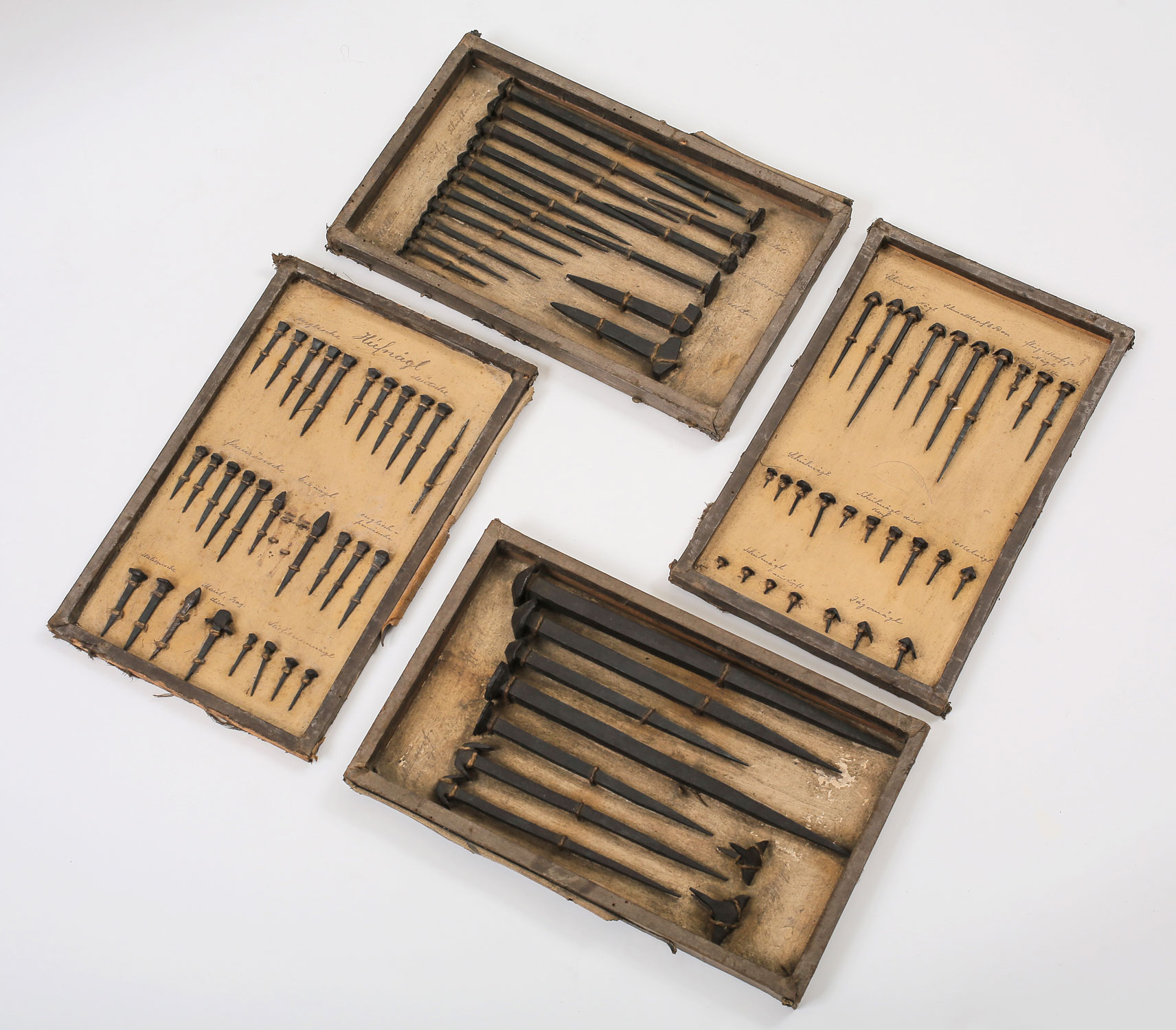 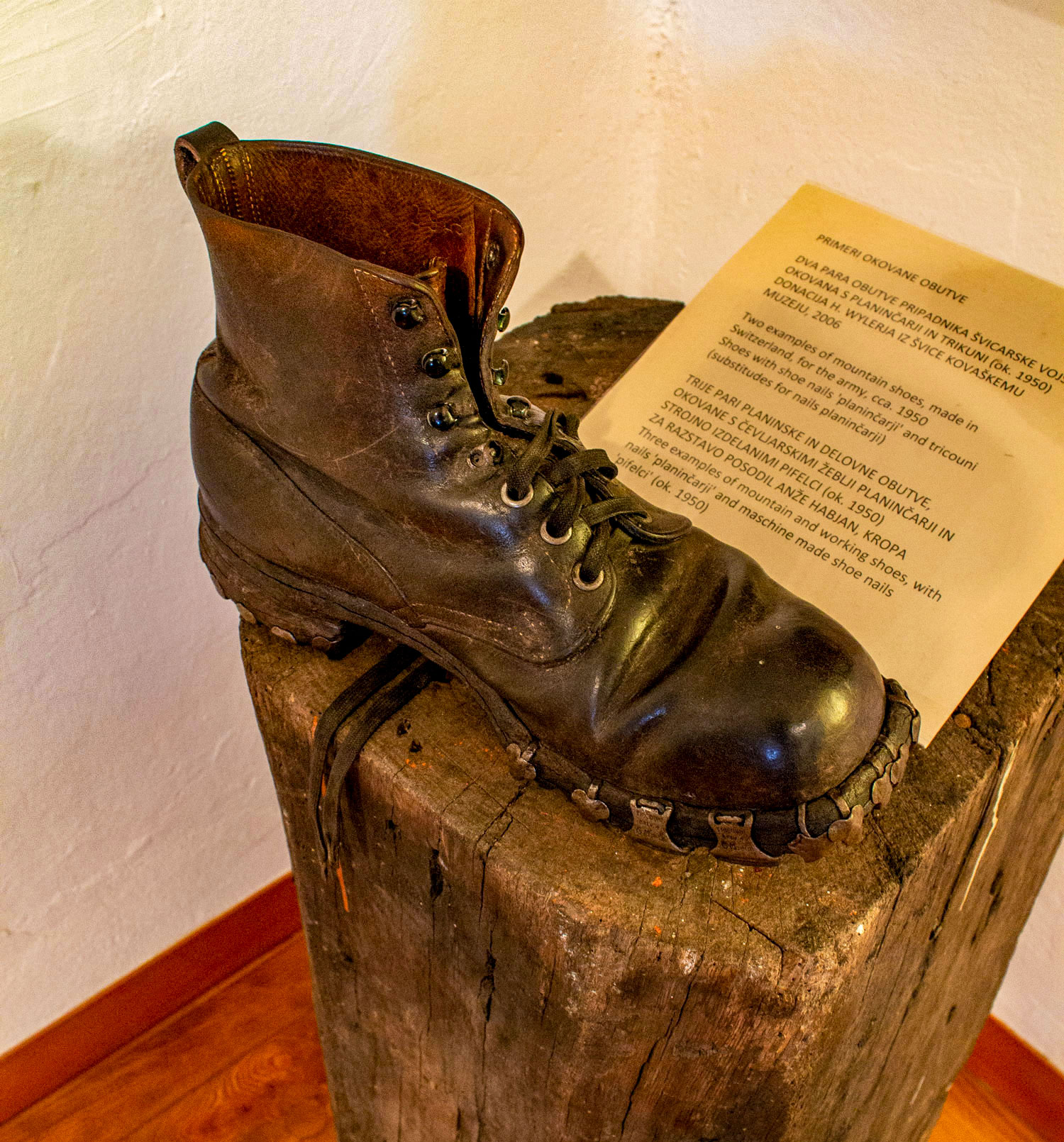 Hand forging of nails in Kropa

The vigenjc Vice, a forge for the manual forging of nails dating from the 18th century, is an unmissable part of the museum’s exhibits of nailmaking in Kropa. The vigenjc Vice is the only preserved forge in Slovenia and one of just a few still working forges in Europe. Nails were still being manually forged in the forge in the first half of the 20th century. Today, tours of the forge, including a demonstration of manual nailmaking, are only available upon prior arrangement.

The word vigenjc was used for nailmaking workshops in Kropa, Kamna Gorica and Železniki. In the 19th century there were 19 vigenjc in Kropa and 10 in Kamna Gorica. Each vigenjc had its own name. The vigenjc Vice stands on a small flat area beneath the dam of the former Upper foundry, which was demolished in 1920, beside the rake water channels that run in parallel with the Kroparica stream. In the past eight cajnarica (slitting mills) and vigenjc drove up to 50 water wheels alongside the Kroparica stream for the needs of the two foundries. 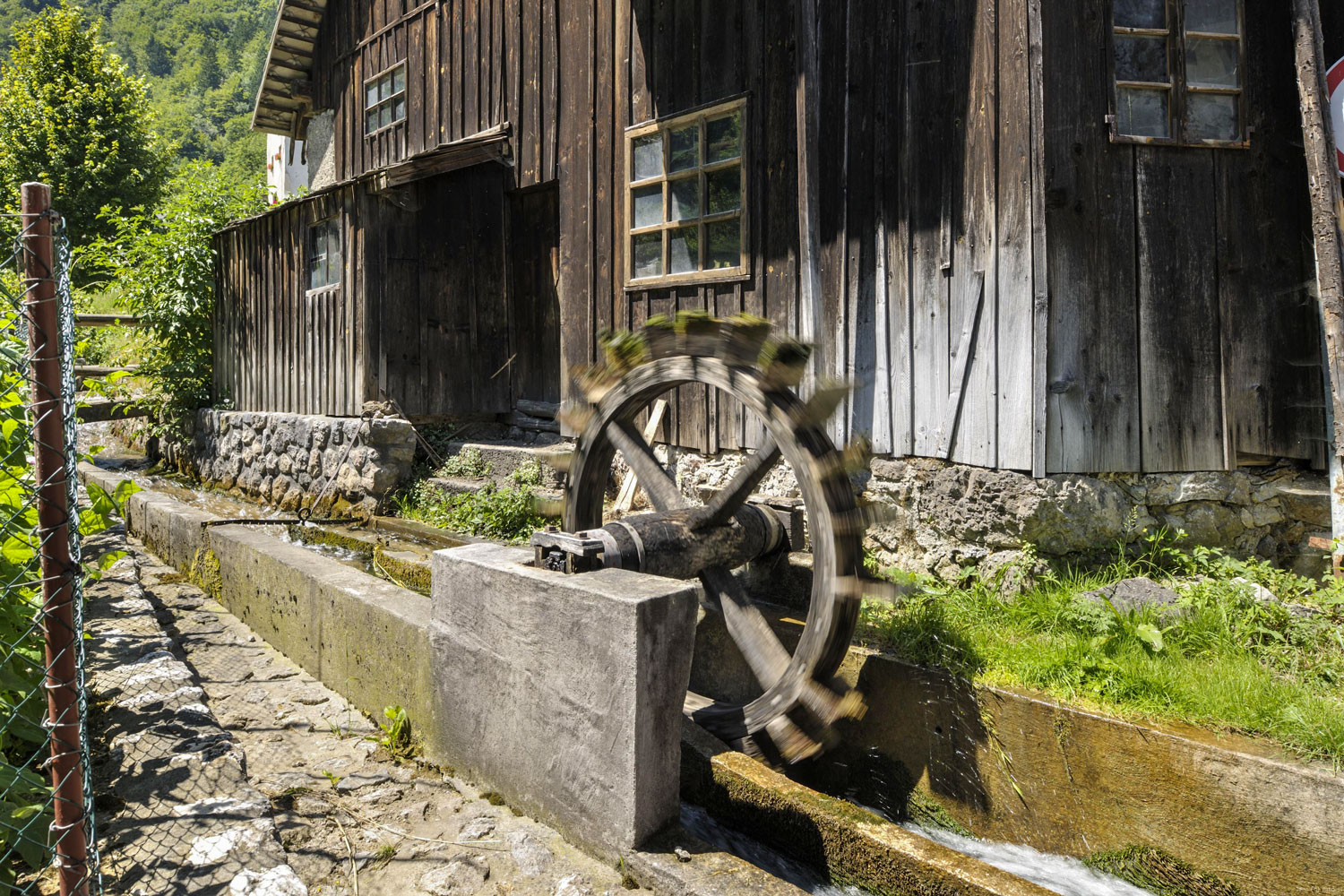 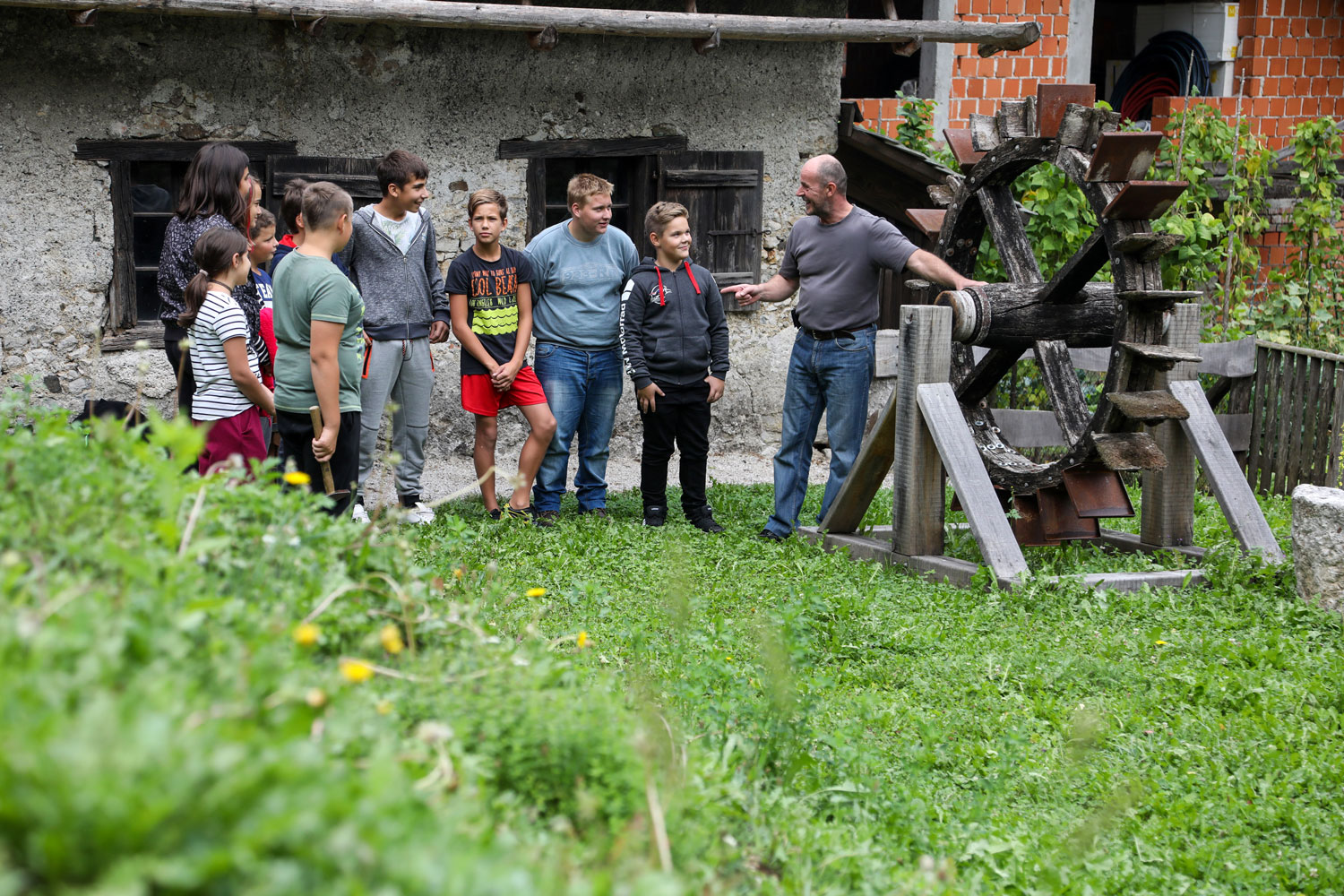 The vigenjc were built partly of wood and partly of stone. Two sides of the vigenjc Vice are wooden; on the interior of one side there is a warehouse for coal. The vigenjc formerly had multiple blacksmiths’ hearths. They were shaped like irregular octagons and were accessible from all sides. The hearths were made from stone and compacted earth within a frame made from wooden boards. All three of the hearths in the vigenjc Vice have been preserved (reconstructed). In the centre of the blacksmiths’ hearth there is an area for fire which was supplied with air by the bellows. The windpipes run to all three hearths, while the bellows are driven by the water wheel next to the vigenjc. Iron rods were heated in the glowing charcoal of the fire in the hearths, which was shared by all the blacksmiths, from which nails were then made.

There are individual blacksmiths’ workplaces around the hearths – wooden stumps with anvils. There were usually around four to six wooden stumps around one hearth, depending on whether the blacksmiths were working alone or had assistance. In the 19th century the stumps were still wooden, then they were substituted by more hardwearing versions made of stone. On each stump the blacksmiths had a nailmaker’s anvil on which they made nail stems, while the nail heads were shaped using a special model. The blacksmiths used hammers and special metal pincers, then the nails were placed in a specially designed punctured metal container. 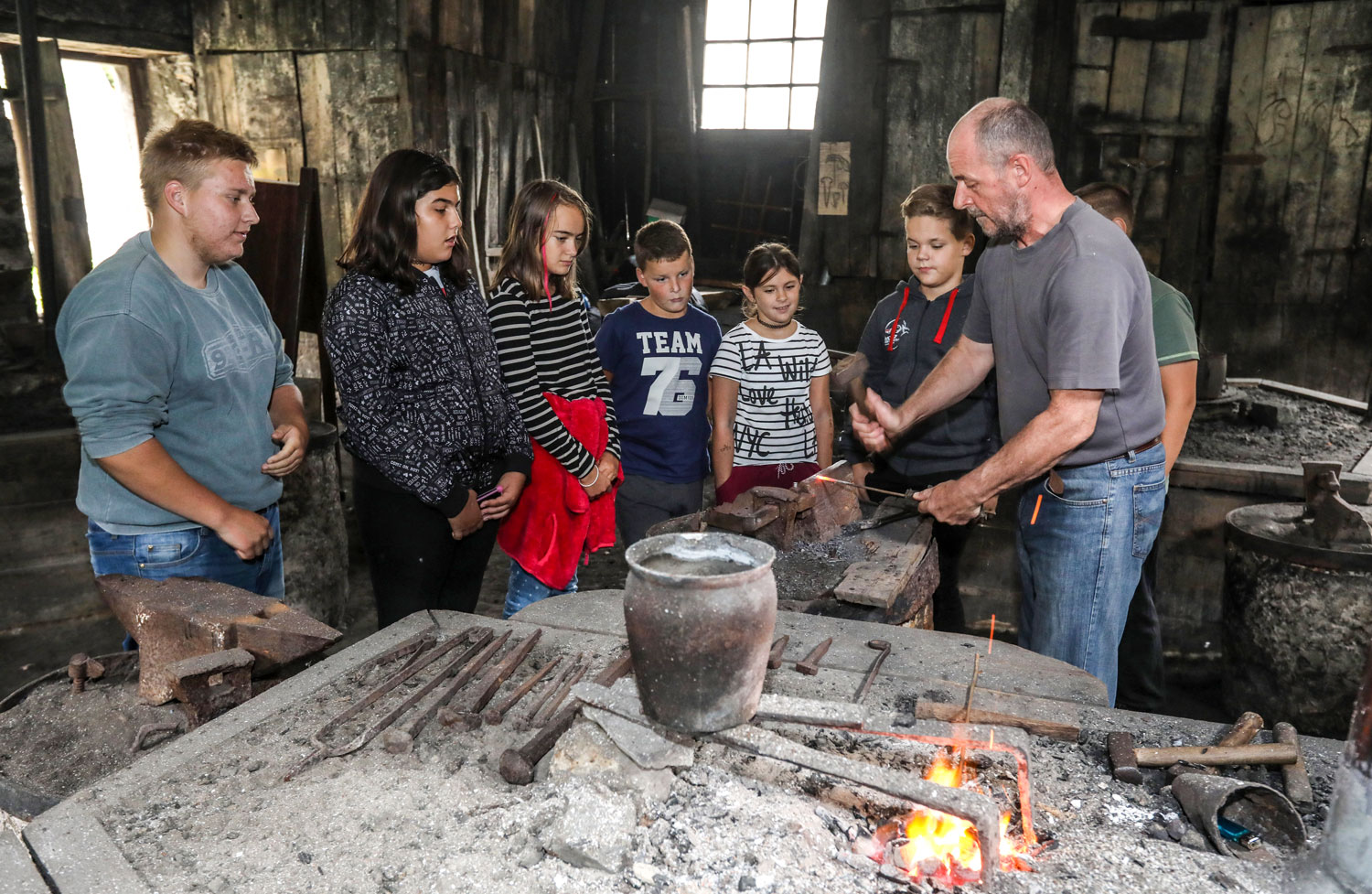 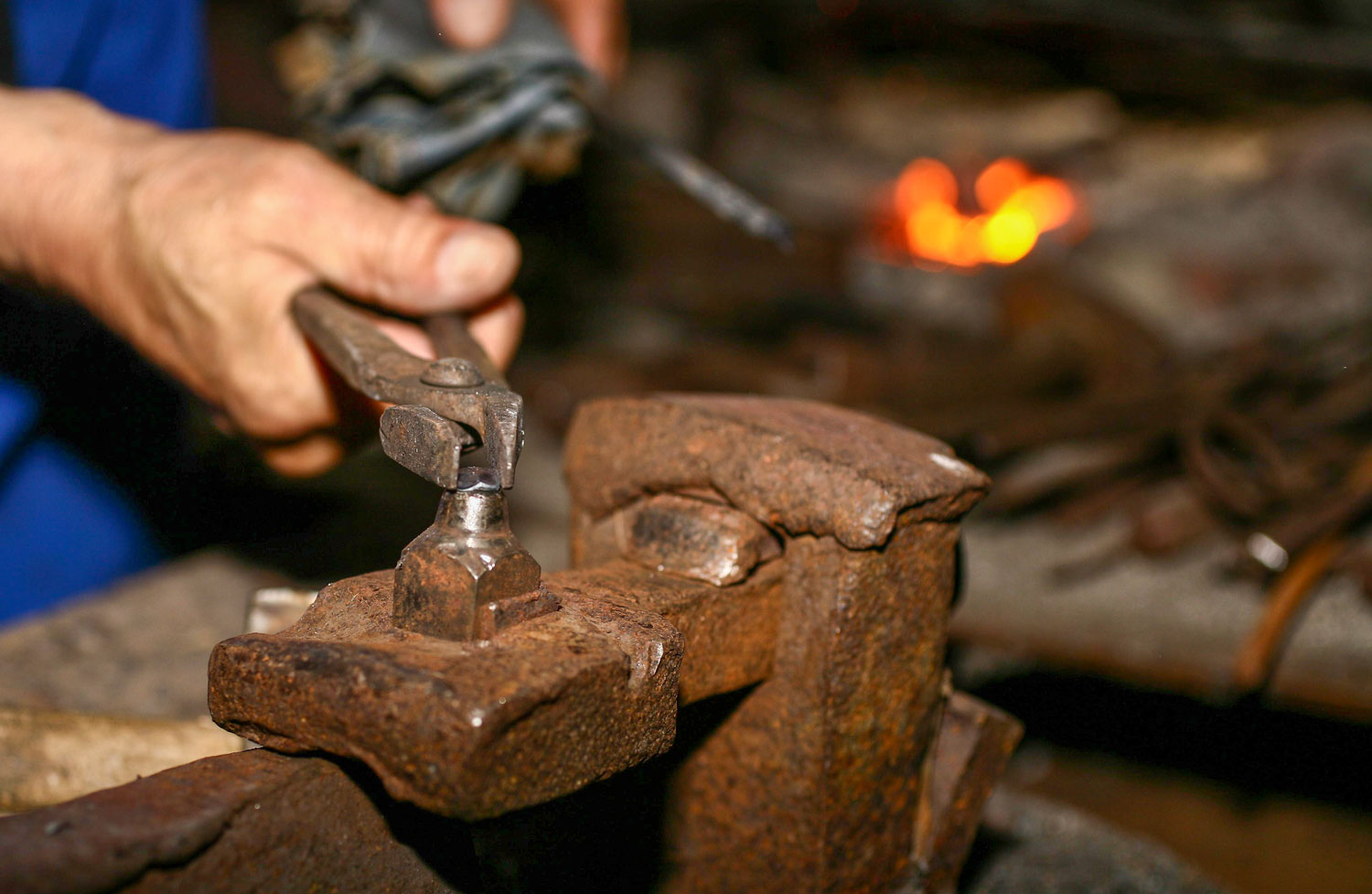 The blacksmiths forged up to 2,000 nails per day. They were paid based on the number of nails they made (piecework). They forged for the ironworkers, who provided them with the necessary iron and charcoal, and who also sub-let them modest apartments on the upper floors of their large ironworkers’ houses. Both men and women worked as blacksmiths. The blacksmiths and their children spent a good part of their lives in the vigenjc forges, as they worked from early morning to evening. The children first helped the parents, then began to forge independently. The women also cooked in the vigenjc on the blacksmiths’ hearths; the blacksmiths’ hearths had so-called ‘kitchens’ where pots were placed and food was cooked while they worked, most often buckwheat spoonbread and simple stews were cooked, while on Saturdays they made Kroparska žonta (a goulash-like dish made out of calves’ liver).

A visit to the vigenjc Vice forge with a demonstration of the manual forging of nails can be arranged upon prior notice.

The Iron Forging Museum is located in the Klinar House in the centre of the old town of Kropa.

The museum does not provide access for the disabled people.